What’s new in the loo?

The average Australian bathroom hasn’t changed much in the past few decades. Apart from the occasional spa bath, bidet or heated towel rail, it’s a pretty run-of-the-mill experience.

That could all change soon, however, with the advent of new technology that is beginning to invade our bathrooms.

Here are five new trends that you will see emerge in the next few years: 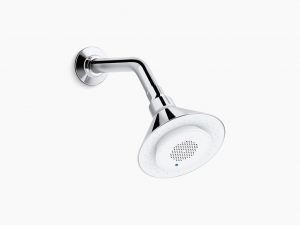 The shower head with a speaker. Picture: Kohler

The Kohler Moxie shower head can stream music through a wireless speaker.

It syncs via Bluetooth with your smart phone, MP3 player, tablet or laptop, which can be up to 10 metres away.

The water-resistant, wireless speaker pops in and out of the shower head so you can recharge it (it has around 7 hours of listening time). 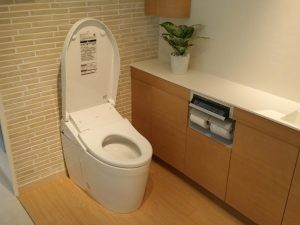 A toilet with all the whistles and bells, or in this case, water jets and warm air. Picture: TOTO

The TOTO Neorest is certainly taking the toilet experience to new levels of comfort.

“Some models have a lid that automatically swings open when users enter the bathroom,” explains Cameron Slater from Smart Style Bathrooms.

“Some also have lids that can glide back into horizontal position, possibly solving the gender battle over flipped-up toilet seats in the home.”

The mirror that is also a TV 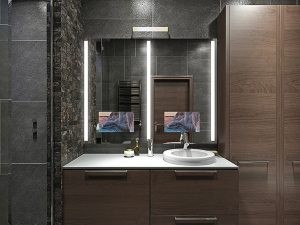 Transform your bathroom with a mirror TV. Picture: Evervue

These have already popped up on The Block, but given how much social media and the web is invading our personal lives, it wouldn’t be surprising if they made their way into more people’s bathrooms.

“Installing a television behind a two-way mirror in the bathroom is an affordable way of adding a new level of quality to your bathroom,” Slater says.

“By having a TV behind your mirror you can check the weather forecast or even watch YouTube clips on makeup tutorials while you’re getting ready,” he says.

The shower with a view 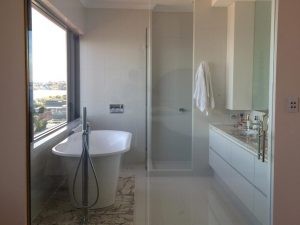 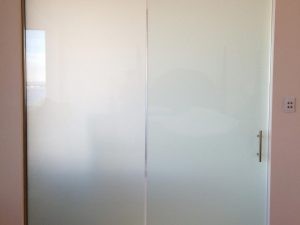 A wide open bathroom with a great view. Picture: Switchglass

If you fancy showering while taking in the landscape of your country property (or city skyline), this could be the answer.

Smart glass windows and shower screens change from clear glass to frosted at the flick of a switch.

But it is made private with the flick of a switch. Picture: Switchglass 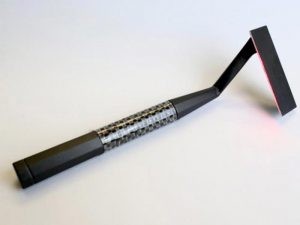 It’s pretty much every man’s dream – a razor that doesn’t cut, scratch or cause irritation. It’s still a prototype and is under development by a company called Skarp.

The product has attracted its share of controversy – initially crowdfunded to the tune of $US4 million the laser razor was suspended from the popular crowdfunding site after doubtSet featured images about its claims.

It has since been picked up by another crowdfunding site, so fingers crossed the dream becomes a reality.